The weekend before last my garden was teeming with birds – long-tailed, great and blue tits, dunnocks, greenfinches, chaffinches, blackbirds, collared doves, wood pigeons, a lesser spotted woodpecker and a robin! Brilliant I thought, that goes well for the RSPB Big Garden Birdwatch on the following weekend.

So, last Saturday, horse, cats and chickens fed and let out, I settled down with my breakfast to watch the two bird feeders in the garden. Nothing came. Ten minutes later, still nothing. Where have they all gone? Had they been ‘stuffing themselves silly’ before I arrived at the window? All the feeders were full, the cats were asleep indoors, so where were they?

After another 10 minutes, and 1 great tit, 3 blue tits and 2 wood pigeons later, I gave up. Perhaps they knew it was the Big Garden Birdwatch Weekend and had flown off to another garden ? Maybe the fact that one of my cats (grrrr) had caught a blue tit and my one remaining robin *sobs* during the week, was keeping them away. I’ll watch out earlier tomorrow I thought, when they were would be stocking up after a cold night.
To my amazement, when I awoke Sunday morning and looked out of the window… all the snow had gone! I had never known it to thaw so quickly. I soon discovered that the barn and the greenhouse were both flooded, but no damage fortunately.

Oh, how lovely it was to stride across the yard without fear of going A over T. Not having to take geriatric little steps. I must have looked so funny bundled up in my five layers of clothing tottering about the place ! Good job nobody could see me.

The sun shone down from a blue sky and the wind blew fiercely scattering all my flowerpots and stable tools all over the place and slamming gates into my groin. Ho hum, when will we ever get the weather we want? Must be positive, at least the sunshine and the wind will help dry the ground, which had turned into liquid mud!

Had to chuckle when I heard somebody on the radio recommending making lots of snowmen before the snow went, to cut down on the amount of snow thawing all at the same time. Wonder if anybody followed their advice?

Jobs done I made a cuppa and settle down to watch the birds… What birds? Perhaps they had all gone on holiday to warmer climes? I gave up after another 20 minutes with a paltrey total to load onto the RSPB website. Wanted to say that I usually have four times as many birds, but there wasn’t a box for that 🙁 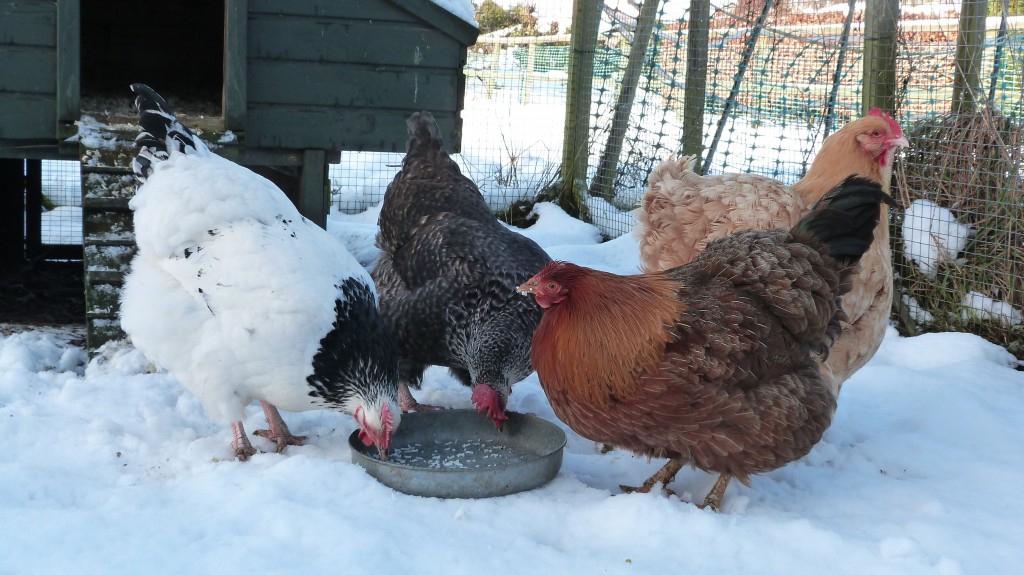 Still, have to be grateful for small mercies, the chickens on Saturday finally came out to peck around in the last of the snow and enjoy some boiled rice I gave them.

Maybe I will have better luck with the Big Garden Birdwatch next year!

4 thoughts on “Where have all the birds gone?”