I really can’t believe that it’s been three weeks since I jumped off Max (my horse, er, in case you were wondering!) landing on his foot and breaking my right ankle!

Am finding out just how useful crutches are: for turning on light switches; dragging Alfie’s food bowl towards me; closing doors, etc., as well, of course, keeping me upright, well most of the time anyway!

A couple of days ago, Nicky, my horsey help, brought Max in early because she couldn’t hang around as her partner was coming over for dinner. That’s okay I said, if you could mix up his dinner (Max’s, not her partners, tee hee) and leave it with his hay in the stable next to his, I’ll cope! Instead of mixing his feed in his big plastic manger, I asked her to put it in a feed bucket with a handle as I would have needed to carry the manger with two hands, not leaving any for my crutches. I could hook the feed bucket over my left hand crutch handle, which would help when I needed a free hand to close the stable door behind me!

I have always insisted that Max stand back when I go in with his feed, making him wait until it was in his manger before he started to eat it. I just hate bargey horses! This training really paid off, because he waited for me to hop to his manger and empty his feed in, before he stuck his head in.

Thinking that slinging a haynet over my shoulder would undoubtedly unbalance my precarious hop to his stable, I had asked Nicky  to put his hay in a large, empty plastic feed sack. Then it was just a matter of dragging it into the stable and emptying it under his manger. Brilliant, all sorted! Oh, how lovely it was to stick my nose into his neck and smell his distinct odour, feeling his soft hair on my face! I hadn’t realised just how much I had missed the contact with him!

Clocks changing tomorrow… Spring forward…. Fall (Autumn) back… my way of remembering whether to go forwards or backwards. Simples. This will mean that Max is coming in earlier (because, of course, it’ll get darker earlier) , so I will take over giving him his feed and hay every night. Have got out of the habit, hope I don’t forget!

Just in case you think that I have become a couch potato, supping tea and watching daytime TV all day, yesterday I pushed the hoover around and made a batch of bread. I am afraid I cheat by using a breadmaker these days, having always made it by hand. Don’t know why, but the loaves weren’t as successful as they used to be. The flour I was using maybe.

Everybody on social media was extolling the virtues of Panasonic breadmakers, above all others. So 9 months ago, I decided to push the boat out (they’re not cheap) and buy one.

I adapt the wholemeal loaf recipe using approx 200 g of wholemeal flour, 125 g of malted flour and 75 g of white flour, for the medium size loaf. I add 40 g of chopped walnuts, 15 g each of pumpkin and sunflower seeds, 10 g each of poppy and sesame seeds to the seed compartment, and, 5 hours later I have a superb loaf. Easy peasy. 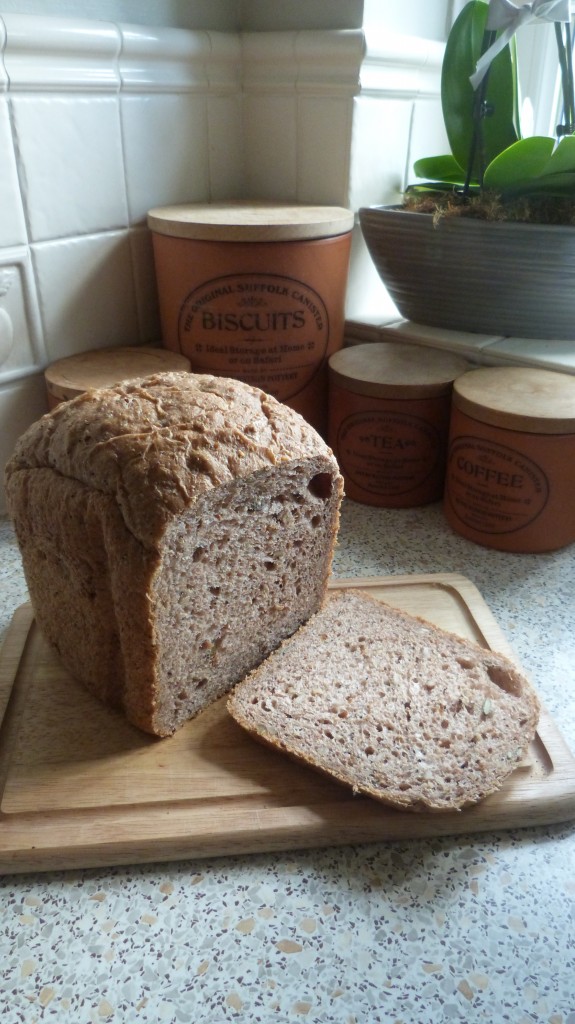