I awoke to the sound of the doorbell. Oh no, I groaned. I looked at the bedside clock. 9.30 a.m. I groaned again. I had overslept!

I am not surprised. My lovely nephew had taken me out to supper the previous night. On the recommendation of a friend, we had gone to a not too recently refurbished pub. I have to say that it was excellent! Brilliant service, friendly atmosphere, lovely tender, tasty steaks and a cheese cake to die for! What more could you want? Thanks Myf for the thumbs up.

We had a good ol’ chin wag, catching up with all the family news, with your’s truly knocking back two large glasses of house red!  All in all, it was a wonderful evening, not only because it was great to leave the cottage after three weeks of internment, but because my nephew is my only close relative (well, he does have a brother and sister whom I haven’t seen since their parents’ funerals) and he is such a lovely chap – so easy to talk to. As he said afterwards on FB, he was amazed at the subjects we covered!

Hence my lingering in the land of nod. I gathered up my thoughts and my crutches. Hobbling to the door in my skimpy night attire I thought I was either going to give Barry (my lovely neighbour Alfie-walker) a heart attack (he’s 72) or a big thrill! I needn’t have worried as, for a change, it was his wife who had come to collect Alfie. She’s lovely too, so bubbly and smiley and ready for a good laugh. They are a very kind, genuine couple and I am greatly indebted to them!

I was a bit reluctant to hoover, or go upstairs as I was awaiting the arrival of an Amazon order. As it takes me much longer to get to the door, I worry in case the courier gets fed up with waiting and sticks the proverbial card through the catflap. Especially as I can’t hop in the car, although I could hop outside it(!), and drive off to collect the package in some far-flung location!

I have to say that the couriers were extremely efficient, because later that day, when opening Outlook,  I saw an email giving me the time it was to be delivered! Marvellous, well done DPD – Predict, ten out of ten. Oh, I do wish that other couriers, and utility companies, could peg down the time of their visits so precisely. Would make life so much easier, especially when working full time.

Well what was the package, you may be wondering? It was a lovely, luxurious, soft cushion for Alfie’s plastic dog bed. When he came to live with me he was delivered with six weeks’ supply of dog food, his lead, feed bowls, bed and cushion. I haven’t told you the story of how we found each other, but I believe it was meant to be. Or fate, however you like to call it.

A couple of months ago when out for a ride on Max, I decided to pop by to see if a friend of mine was in. They both work full time, but also have a small holding with sheep, store cattle, etc. My luck was in and she was working from home that day. During our chat, she asked if I needed any hay as, because it had been such a good year for hay, they had a surplus. I jumped at the chance, because I knew it would be good quality, with no weeds.

So, later that day I went back, without Max, to have a look at said hay. As we were chatting a little dog came out of the house and came up to me putting his paws on my knees, lifted one which he waved at me tilting his head to one side and smiling!

My goodness, what a happy chappie, I thought. Gill, my friend, said that she had never seen him so enthusiastic with a stranger, nor had she seen him smile before! She then asked if I wanted him. You could have knocked me down with a feather. Why on earth would she want to give her dog away? “He’s obviously chosen you”, she said.

It transpired that he had been her mother’s and she had died in May of Alzeimer’s. Alfie had been lodging with them for 18 months or so. Gill’s a cat person who doesn’t really like little dogs and they had never really did get on. So I said yes, I would have him on three weeks’ trial. If he chased the cat he would come back.

The first few weeks I didn’t know whether I really wanted a dog, I still don’t.  I had told myself that if Max expired before me, then I would consider looking for a dog as I had always wanted one, but, working full time, was never in a position to have one. I would have liked a rough coated bitch. But then, things rarely work out according to plan, do they?

Alfie, is such a lovely, kind, little dog without an ounce of aggression in him. He is a bit of a Uriah Heap very ‘umble, very willing to please and, most of the time, very obedient. Which, for a Jack Russell, is more than unusual! He is a happy little fellow, who loves to chase a ball. 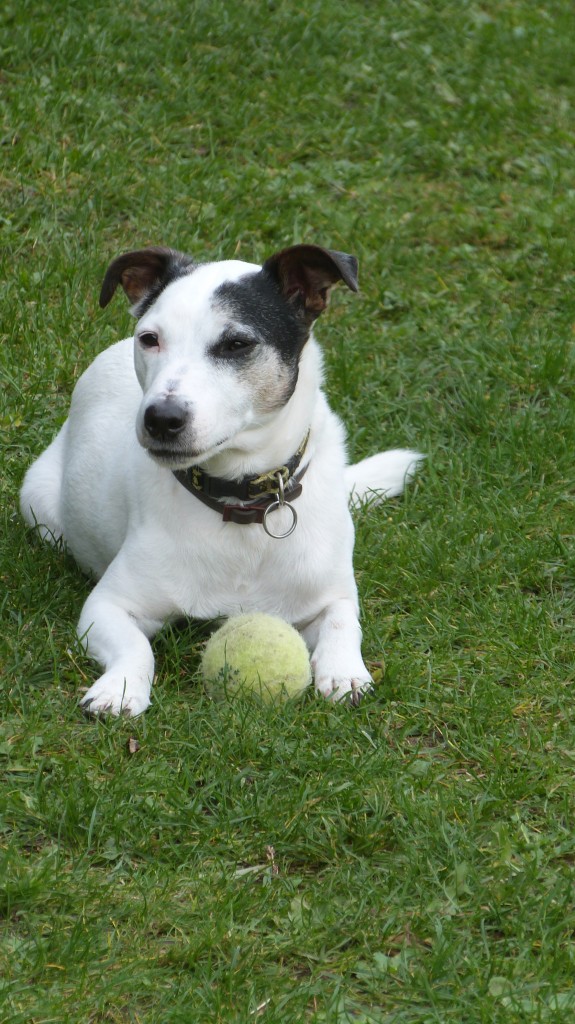 Alfie with his ball

The only trouble is, he won’t let go of it! He’ll run off with it saying catch me if you can! He’ll then go beserk, roaring around the paddock like something besotted. He’s full of joie de vivre and does make me laugh!

In the short time he has been with me, he has been such a jolly little companion, especially since I have been cottage-bound. Everybody loves him, he loves everybody. He has been marvellous with my one remaining cat, the nervous little Minnie. Very, very wary of her (I think Gill’s old cat had bopped him on the nose more than once). Because of his timidity, she has gone to him and shows no fear in his company, it is wonderful, more than I could have hoped for. The only times she scoots off is when the doorbell rings and he rushes to the door barking madly. I consider myself very lucky, knowing what some dogs are like.

Because he is such a star, I felt that he deserved a new cushion as his other one is getting a little tatty, with its stuffing coming out. I had searched long and hard on Ebay and Amazon, but all the cheaper ones had negative reviews. I always check out the reviews when buying online. In the end, I decided on this one, which was ridiculously expensive, but I felt that for all the love and devotion he was giving me, he was worth it!

2 thoughts on “More musings from an OAP on crutches”