Judging by the number of poor people who are still without electricity after Monday morning’s storm, we were really quite lucky. I am surprised that we didn’t have a power cut as we normally have one hereabouts nearly every month!

We kept Max in his stable while the storm was at its height on Monday morning. Sadly for my neighbour’s (and maybe for my new fencing panels), a huge chunky branch off their willow tree crashed down on top of their swing (fortunately no child on it at the time!) and my fence. I have to say that the rest of the tree looks rather dangerous, and, if I was my other neighbour, I would be worried that it would come crashing down on my conservatory! 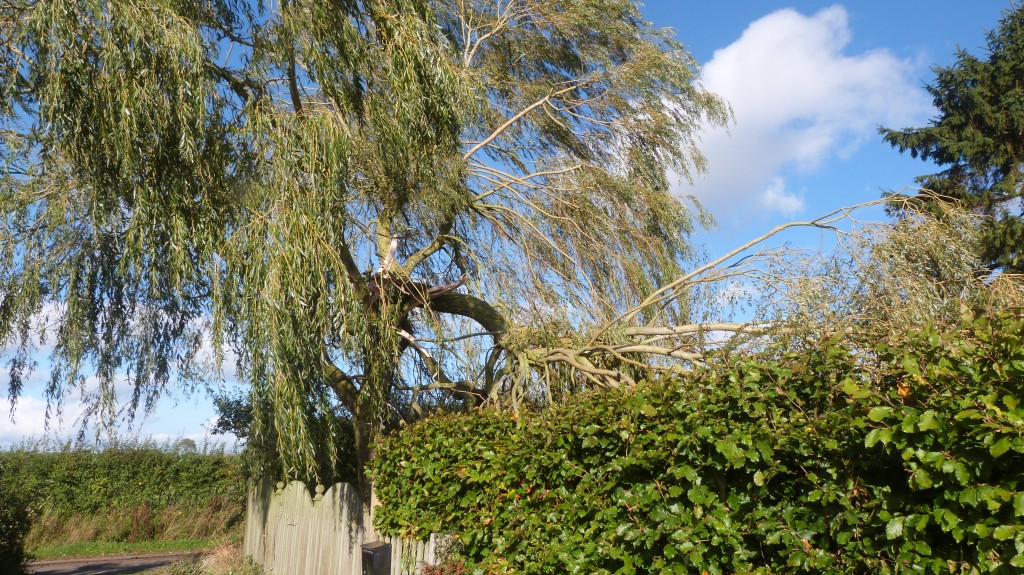 A casualty of the October storm! 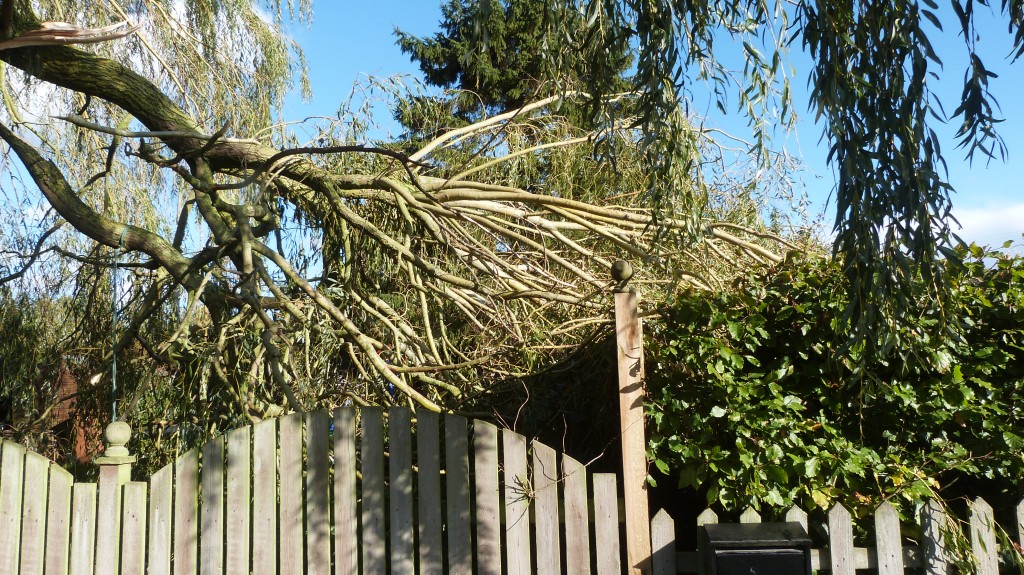 Will this herald the demise of this willow?

Oh dear, and my beans have come crashing to the ground! 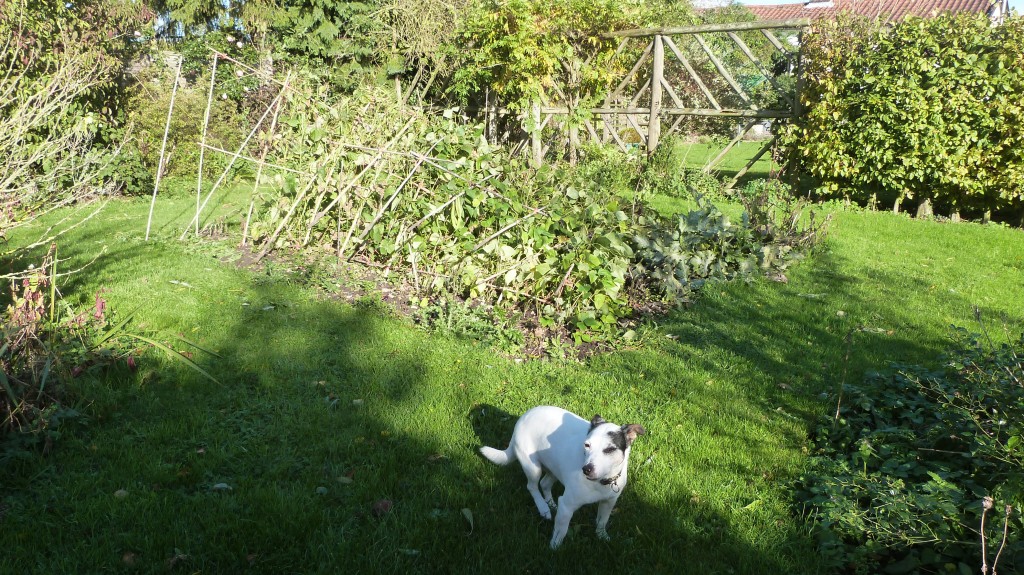 Will have to be careful when Alfie and I go down to check the post box, as we do after lunch every day, that no branches drop on our heads – it all looks decidedly dodgey!

As the weather is getting colder, I thought that I had better hop out and start my car up and run it for ten minutes, as it’s about two weeks since Barry, the builder did it for me. Don’t want the battery to go flat on me… Whoops. It’s not just my bean support that’s flat, my car battery is too. Boo hoo. Now, what do I do? Do I ask somebody to put the battery on my charger, or do I wait before I can drive, then charge it up then? Probably the latter is the better idea, as I won’t need to keep turning the engine over regularly for the next few weeks, before I can drive. Wonder when that will be?

This time last week I made my first ever Sainsbury’s online order, tempted by the £15 discount for first orders. As the cost of delivery on Saturday evening is only £2.50 (because Strictly is on TV I wonder?), I went for that. Was most impressed that 24 hours before my delivery slot, they emailed me to say that I could amend my order up to and until 11 pm on Friday night. What a good idea, as ever, you always remember items you’ve forgotten to include in the order. Taking advantage of the chance to amend my order, I followed the instructions in the email, going into my account, where I could see my order, and clicked ‘amend’. Eeeeek the screen went blank, except for the headings. Heeelp! I  yelled when returning to my account only to find that the ordered had completely disappeared!

Not knowing my way around Sainsbury’s online (have done many Tesco online orders) it had taken me over an hour to input my order. All wasted! I was furious, to say the least and banged off three irate emails to their helpline, hoping that somebody could bale me out as the 11 pm deadline was fast approaching and I had nothing to look forward to but an empty fridge!

By 10.40 in desperation I phoned their helpline (don’t know why I hadn’t thought of that in the first place). The young lady was very helpful and talked me through what I had to do, as, indeed, my order hadn’t been lost! (Hurrah!!) After I had clicked on amend, as previously instructed, and the main screen went blank, she told be to click on basket. This took me back to my order where I could include those item I had forgotten, proceeding to check out as normal. Easy peasey…. when you know how!

After several emails from Sainsbury’s apologising for my experience which they thought was because of new programming functionality with their updated website, which was currently being integrated into their current site.

The next day I emailed the helpline again, suggesting that to stop this happening to other customers, all they needed to do was to include some more instructions vis: When you click on ‘amend’ your order will disappear from your account. By clicking on ‘basket’, you will return to your order where you will be able to add the extra items and continue as normal. Crazy that they only give you half of the instructions to get into your order. They said that they would take my suggestions on board, so that’s something I suppose! Oh yes, and they gave me a £10 voucher code to show their good will. Even better I say!

Apparently I should have disconnected my car battery, knowing I wouldn’t be using it for at least six weeks. Why didn’t anybody tell me? Will now have to ask somebody to remove it from the car for me and I’ll put it on charge, hoping that it will take it. If not it’s a new batttery. Not what I want to hear. Oh, I do so hate being reliant on other people to help me. Is this is what it’s going to be like when I’m old? God forbid.

Footnote: News report on TV re Suffolk villages still without power showing a young mother with her baby. She was dressed in a down jacket and long boots, saying she couldn’t keep the baby warm despite layers of clothes and a blanket, as they had no heating. I shouted at the TV “Then put a woolly hat on him you silly girl!!!” Don’t people realise that 30% of heat loss is through the head? Grrrrrr!!