Since yesterday, I am on full stable duties, thus giving Nicky more time to take Max up to the meadow. Yesterday was hard work as it was ‘wet day’, that is the day that Nicky takes all his wet shavings out of his stable. I helped by removing all the dry stuff and banking it up around the edge of the stable, leaving just a big patch of wet for Nicky to cart off to the muck heap.

Proves just how soft my hands have become over the last five weeks, as, after moving all those shavings, I had the start of blisters on my hands!

Was up bright and early to give Max his breakfast before Nicky  arrived, so she could just change his rugs and take him up to his field. I mix his feed with water in the kitchen in the morning and then hook the bucket onto my crutch, and with difficulty as I am lopsided, hobble out to the stable. Yesterday, chucking around all of those shavings I found that my shower cap, over my orthopaedic boot wasn’t protection enough, so I tied a carrier bag over my boot first, then slipped on the shower cap. Felt quite chuffed with this arrangement, safe in the knowledge that I would keep the boot clean! It wasn’t until I had negotiated the stepping stones on the gravel outside my backdoor, then hopped across the yard, through the gate to Max’s stable – until I took the bucket off my left crutch, in order to open the stable door – that I could see my left foot. Oh dearie me, I still had my slipper on! Oh, how silly. Then had to hop back indoors to change into my wellie. 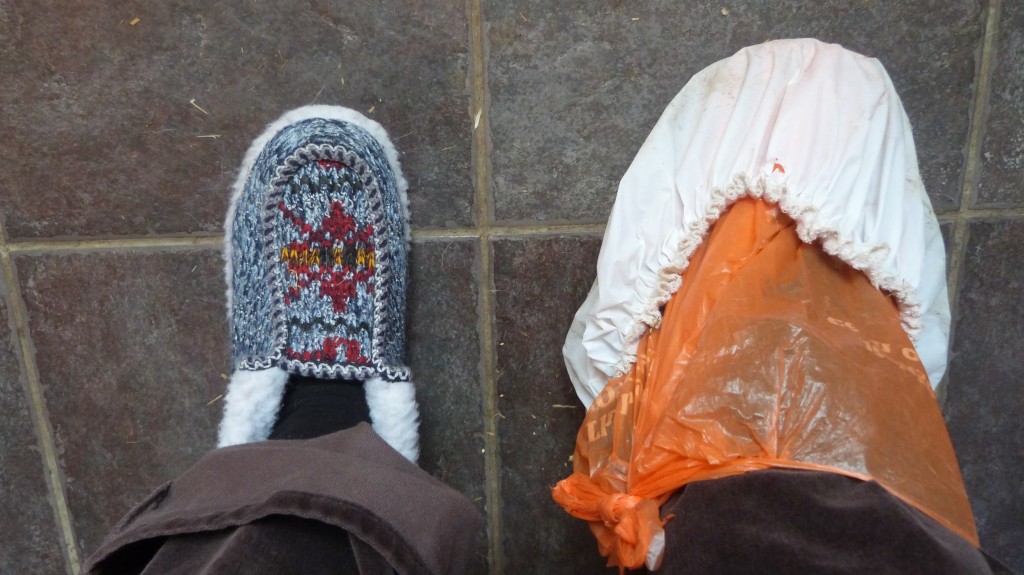 Fancy going outside with my slipper on!

Mucking out, scrubbing manger, feed bucket and water bucket, sweeping up outside the stable, filling the hens’ hopper, was quite enough in one go for my unfit body, so decided to just fill the birdseed feeders and come in for breakfast.

I used to fill the bird feeders up every day or so. Today was the first time I had filled them for over a week. Oh, where have all my birds gone? Only seem to see great tits, a robin and the odd greenfinch on the feeder nearest the window, these days. Have they all disappeared to another garden in the village, that has a more plentiful supply? Are more people feeding them, so they are spread more thinly among the gardens? Or are there fewer birds? I do so hope it’s not the latter.

It’s a beautiful day and the sun is streaming in through the French windows. Only trouble is, that it shows up all the dust (and the dirty windows). After breakfast, before I sat down and put my foot up, I decided I would do some dusting with my super duper anti static wand thingey. Was a bit gung ho pushing it around behind a china candlestick, but, at the same time, being careful not to hit a rather precious blue and white meat charger hanging on the wall. As soon as I touched it, I knew that, with my reduced mobility, I wouldn’t be able to nip around and catch it, and it was destined to hit the floor, with a disasterous result. 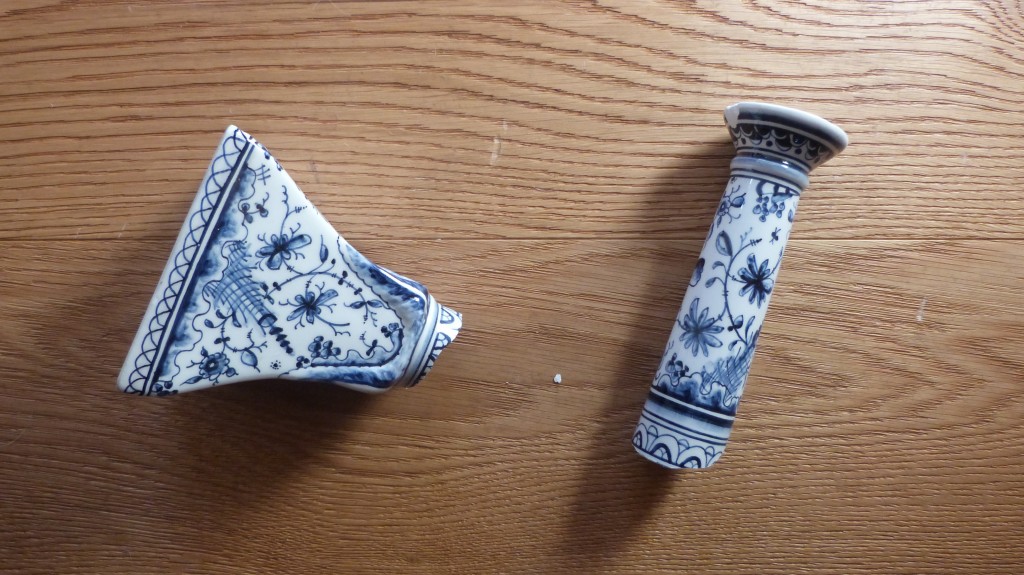 Oh dear, now that was really silly. Thinking that I ought to quit while I was ahead, I decided to sit down, put my foot up, and check my emails. Seems to me, a far safer occupation in my present frame of mind! Ho hum, these things happen, never mind, like Humpty Dumpty, I can stick it back together again!